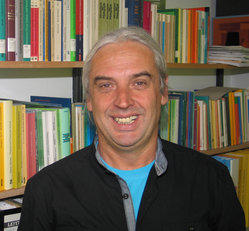 is pleased to invite you to the public lecture of Prof. Krassimir Stoyanov

The first part of the lecture will be a brief presentation of some of the current educational initiatives in Germany in the case of the coming to the country refugees. After that the lecturer will discuss what challenges face the educational practices in the process of re-actualizing and bringing up to date the notion of education itself in its normative implications.

Krassimir Stoyanov is professor in Philosophy and Educational Theory at KU Eichstätt-Ingolstadt (Bavaria), head of the department “Educational Theory and Philosophy” and dean of the Philosophy and Pedagogy Faculty at the same university. He has been guest lecturer at numerous universities in Germany, Bulgaria, USA, Poland, England, South Africa, Finland and India. Prof. Stoyanov has more than 70 publications, among them the monograph “Educational Justice. Reconstructions of one Argued Notions” (2011), which concentrates significant and sustainable interest in the German-lingual social-scientific and educational spheres. At the moment he prepares for publication a new book with working title „Education, Self-Consciousness, and Reasoning. A New-Hegelian Perspective“.

In the frame of the project “Civic Practice for Students and Teachers. Post 2011 protests” funded by the NGO Programme in Bulgaria under the European Economic Area Financial Mechanism 2009-2014 (www.ngogrants.bg)

We are expecting you!